The New Mexico Higher Education Department and researchers at the University of New Mexico announced that New Mexico will be the first state to launch a statewide study to assess the food and housing security needs of students at all New Mexico public colleges and universities.

“Free and reduced lunch programs have been part of an ongoing national effort to ensure children are not hungry during the school day, but as students go on to college, those safety nets disappear and students are left wondering when they will eat again,” said Lt. Governor Howie Morales. “We as a nation do not have a lot of data and research telling us how college students are impacted by food insecurity. However, through Gov. Lujan Grisham’s Food Initiative in partnership with the Higher Education Department and the University of New Mexico’s Basic Needs Project, we can solve this problem and make it easier for students at every campus to succeed, graduate and enter the workforce.”

The Statewide Food and Housing Basic Needs Survey will be used to help decisionmakers allocate resources with targeted solutions aimed at students and communities who need it most. Funded by Gov. Michelle Lujan Grisham’s Food Initiative, the research project will engage 28 public college and university campuses, faculty, and student researchers led by the University of New Mexico’s Basic Needs Project with Dr. Sarita Cargas as the research lead. The initiative was officially launched during an event last week at the University of New Mexico featuring Lt. Governor Morales, Higher Education Secretary Stephanie M. Rodriguez, higher education officials, and students.

The agency also announced that 15 campus-based student food security projects will receive a total $900,000 in funding via the Gov. Lujan Grisham Food Initiative, including student food pantries, food hubs, greenhouses, and food education programs that are expected to benefit more than 15,000 students impacted by food insecurity. Gov. Lujan Grisham directed over $24 million this year to address food security via an eight-agency collaboration, including the New Mexico Higher Education Department, marking the largest investment to combat hunger in state history. The agency will announce the grant awardees in a separate release in the coming days.

“Together with Gov. Lujan Grisham and our higher education partners, we are leading the nation and continuing the work of making sure that New Mexico’s college and university campuses are hunger-free and student-ready,” said Deputy Secretary Dr. Patricia Trujillo who is leading the project at the agency. “That is why we are committed to supporting students not only through tuition-free college, but the wraparound services that will help them reach graduation day.” 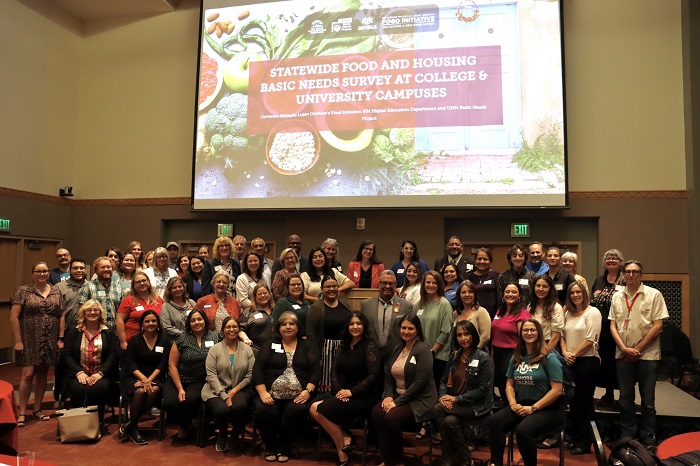 The University of New Mexico’s Basic Needs Project research team is developing the survey that will be deployed statewide early next year. Responses will help researchers understand levels of hunger, food insecurity, and other needs. The 2023 study will gather information about the needs of students at 28 public and Tribal college and university campuses across New Mexico that will inform policies and funding to address student basic needs. University of New Mexico President Garnett Stokes has also designated the project as one of UNM’s Grand Challenges, research initiatives that aim to address important issues in the state.

“No one has done a statewide study like we’re about to embark on. The body of research on the problem of college hunger and housing insecurity is young but growing. There is no national data for college students like there is for household hunger and very little research has included college students in the Southwest. Together with the New Mexico Higher Education Department, we are forming these partnerships to fill those gaps that will make New Mexico a national leader in addressing college hunger.” said Dr. Sarita Cargas, University of New Mexico Associate Professor of Human Rights and Director of the UNM Basic Needs Project.

According to the 2021 UNM Basic Needs Report, approximately one third of students at the University of New Mexico reported being food insecure and over a quarter did not have reliable access to enough affordable, nutritious food, with Native American, Hispanic, Black, and LGTBQ+ students struggling at higher rates. Food insecure students were almost twice as likely to withdraw from or fail multiple courses compared to food secure students, and almost 20 percent of food insecure Native American, Hispanic, and Black students did not return the following semester.

“As someone who has experienced a lot of food insecurity growing up and even in college – I actually dropped out of college because of food and basic needs issues – it's important to get numbers and data on why this is happening. It feels impossible to succeed when you’re struggling with this. You can’t study, you can’t focus, or do anything,” said Cassandra Huneau, a current undergraduate researcher at the University of New Mexico working on the statewide study.